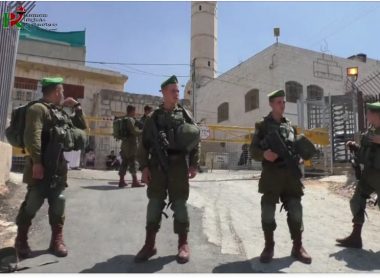 Israeli soldiers closed, Friday, all roadblocks leading to Tel Rumedia area and the Shuhada Street, in the center of Hebron city, and prevented the Palestinians from leaving the area, or returning to their homes.

Local nonviolent activist, Yasser Abu Markhiyya, said the soldiers closed all military roadblocks leading to Tel Rumedia, and prevented the residents from crossing them while trying to return to their homes after praying in the Ibrahimi Mosque.

The Israeli army kept the area closed for more than one hour, and never provided any justification for shutting it down in the first place.

Emad Abu Shamsiyya, the coordinator of Human Rights Defender Coalition, said Israel has been trying to fully control Tel Rumedia since 1984, after it illegally confiscated large areas owned by several families, including Abu Haikal and Qfeisha.

He added that, directly after the illegal confiscation, a group of colonists installed mobile homes, which became the core foundation of Ramat Yishai colony in the heart of Tel Rumeida neighborhood, where 140 Palestinian families reside.

Since then, he said, Israel completely surrounded the families with three permanent military roadblocks, and is seeking their removal for the benefit of the illegal colonists.