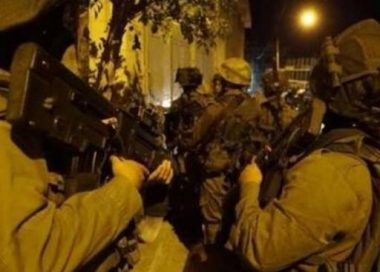 Dozens of Israeli soldiers invaded, on Wednesday at dawn, ‚ÄėAida refugee camp, north of the West Bank city of Bethlehem, abducted a former political prisoner and summoned a child for interrogation.

Media sources in Bethlehem said the soldiers stormed and searched several homes in the refugee camp, and interrogated many Palestinians while inspecting their ID cards.

They added that the soldiers abducted a former political prisoner, identified as Bassam Mohammad Abu Khdeir, 26, and summoned Laith Fadi Abu ‚ÄėAker, 14, for interrogation in Etzion military base and security center, south of Bethlehem.

« Trump Abandons All Pretense of Being a ‚ÄėFair Broker‚Äô in the Israel-Palestinian Conflict PPS: ‚ÄúIsraeli Soldiers Abduct Nine Palestinians In The West Bank‚ÄĚ »