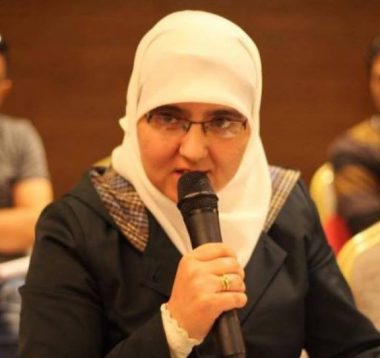 Israeli soldiers abducted, on Tuesday at dawn, a member of the City Council in Hebron, in the southern part of the occupied West Bank, after storming her home and ransacking it.

The City Council member, Suzan Abdul-Karim al-‘Oweiwi, 39, has a Master’s Degree in Institution Building and Development from the Al-Quds University, and is a social activist and a volunteer in advocating the right of Palestinian detainees, held by Israel, in addition to the cause of the refugees and the Right or Return.

After her election to the Municipality in Hebron, last year, she started advancing, and improving services provided to the Palestinians.

During the election campaign, Israeli Intelligence officers started threatening her, and said they will arrest her is she does not withdraw from the election, or if she gets elected, in addition to issuing recent orders banning her from leaving the West Bank.

The head of Hebron City Council, Taiseer Abu Sneina, and the members of the council, issued statements strongly denouncing the abduction of al-‘Oweiwi, who was taken to an unknown destination. Abu Sneina said al-’Oweiwi’s abduction, is yet another assault on the Palestinian people, and their elected officials.

He demanded legal and human rights organizations to intervene, and act on stopping the escalating Israeli violations against the Palestinian people, called for al-‘Oweiwi’s instant release, and the release of all detainees, held by Israel, the occupying power, in direct violation of various International human rights agreements and laws.

Suzan was among fourteen Palestinians, who were abducted by the army, on Wednesday at dawn, during extensive and violent searches of homes, in several parts of the occupied West Bank.