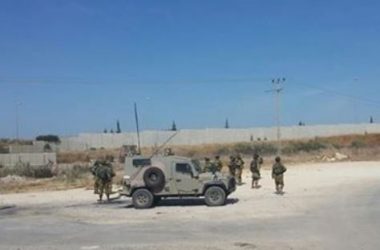 Israeli soldiers abducted, on Sunday at night, a young Palestinian man, and briefly detained two others, from the al-‘Assa’sa village, and Ya’bad town, southwest of the northern West Bank city of Jenin.

The soldiers abducted Khaled As’ous, from the al-‘Assa’sa village, after stopping him at a military roadblock, near Deir Sharaf town, north of Nablus, in the northern part of the West Bank.

The soldiers also stopped Yousef Mahmoud Hamarsha, 18, and Laith Ahmad Hamarsha, 14, at a sudden military roadblock, installed at the main entrance of Ya’bad town, detained and interrogated them for more than two hours, while inspecting their ID cards.