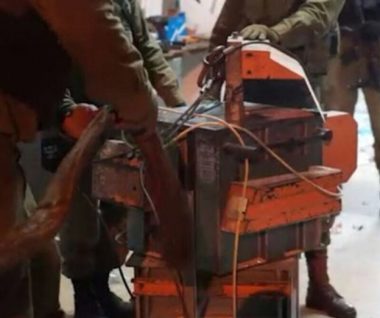 Israeli soldiers abducted, on Thursday at dawn, one Palestinians from the al-Roosh al-Foqa village, south of the southern West Bank city of Hebron, and confiscated his car.

The soldiers invaded the village, one of many communities surrounding Doura town, south of Hebron, before storming and searching many homes, and abducted Mohammad Othman al-Harbiyyat.

The soldiers also confiscated Mohammad’s car, and took them to an unknown destination, media sources in Hebron said.

Also in Hebron, the soldiers broke into a blacksmith’s workshop, confiscated its machines and tools, allegedly for being used to manufacture weapons.

In related news, the soldiers invaded Rantis village, west of Ramallah in central West Bank, and sealed shut a shop, after alleging it “served as a gathering point for planning attacks against Israeli targets.”

The Maan News Agency has reported that the soldiers have abducted 15 Palestinians in various parts of the West Bank, three of them in Kufur Qaddoum near Qalqilia, in northern West Bank, two in Kifl Hares village, west of Salfit, one in ‘Abwein village north of Ramallah, one in Husan town, west of Bethlehem, and one who was taken prisoner at the Allenby border terminal between Jordan and the West Bank.