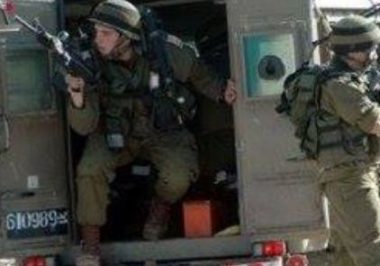 Israeli soldiers abducted, earlier Thursday, one Palestinian from his home, in the al-‘Arroub refugee camp, north of the southern West Bank city of Hebron.

The Hebron office of the Palestinian Prisoners’ Society (PPS) said the soldiers invaded and violently searched homes in the refugee camp, and abducted Mohammad Medhat Ayyoub, before taking him to Etzion military base, north of Hebron.

It added that the soldiers invaded Yatta town, and Hadab al-Fawwar village, south of Hebron, and violently searched many homes.

Among the invaded properties are the home of former political prisoner, Nafeth Mohammad A’mar, in addition to the homes of his father and brothers, and the property of Mousa Asfour.

Nafeth said the soldiers interrogated him, and his family, while violently searching their homes.

It is worth mentioning that the soldiers invaded, on Thursday at dawn, dozens of homes in the Deheishe refugee camp, south of Bethlehem, shot ten young men, and abducted one, in addition to abducting three Palestinians near Nablus, and two near Jenin.