Army Injures 10 And Abducts One Palestinian In Bethlehem, Five Near Nablus And Jenin 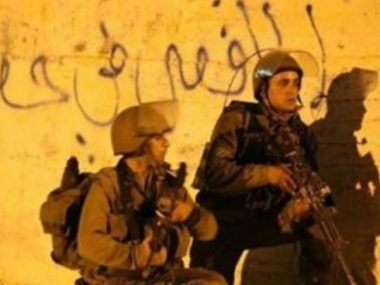 Dozens of Israeli soldiers invaded, on Thursday at dawn, the Deheishe refugee camp, south of Bethlehem, shot ten young men, and abducted one, in addition to abducting three Palestinians near Nablus, and two near Jenin.

They added that many youngsters hurled stones at the invading army jeeps, while the soldiers fired many live rounds, rubber-coated steel bullets and gas bombs, wounding ten Palestinians, including four with live fire.

The Palestinians, who were shot with live fire, were rushed to Beit Jala Governmental hospital for treatment.

The soldiers also invaded and violently searched many homes in the refugee camp, and abducted Ma’ali Issa Ma’ali, 34.

Also in Jenin, the soldiers invaded the villages and towns of Um at-Toot, az-Zababda and Methaloon, and installed many roadblocks in various parts of the governorate.