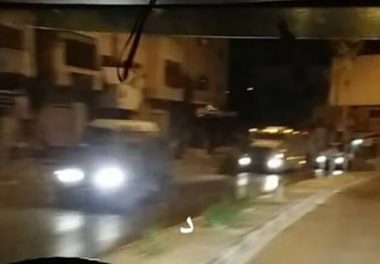 Israeli soldiers abducted, Friday, a young Palestinian man from his home in Bani Neim town, east of Hebron city, in the southern part of the occupied West Bank.

The soldiers invaded the town, before storming and ransacking many homes, casing anxiety attacks among the children, and abducted Mousa Mohammad Zeidat.

The army also installed temporary roadblocks in the town, and around it, before stopping and searching dozens of cars.

In related news, dozens of Israeli soldiers invaded the Deheishe refugee camp, south of the West Bank city of Bethlehem, shot a young man with three rubber-coated steel bullets, and abducted another from his home.