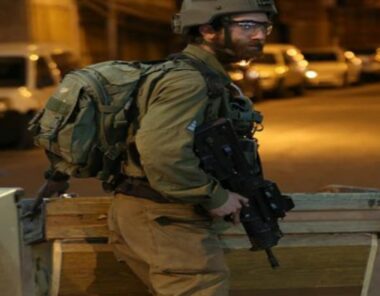 Israeli soldiers abducted, on Tuesday evening, a young Palestinian man at a military roadblock south of Jenin, in the northern part of the occupied West Bank.

Eyewitnesses said the soldiers installed a roadblock near ‘Arraba town, south of Jenin, before stopping and searching dozens of cars, and interrogated many Palestinians while inspecting their ID cards.

They added that the soldiers abducted a young man, identified as Tareq Abdullah Jaradat, 24, from Sielet al-Harithiya town, west of Jenin, and took him to a nearby military base.

Also on Tuesday evening, the soldiers abducted a young Palestinian man near the Halamish illegal Israeli colony, built on stolen Palestinian lands near the central West Bank city of Ramallah, after he allegedly rammed soldiers with his car, wounding one.

On Tuesday at night, Israeli soldiers shot a Palestinian teenage boy near the Halhoul Bridge area, north of Hebron, in the southern part of the occupied West Bank.