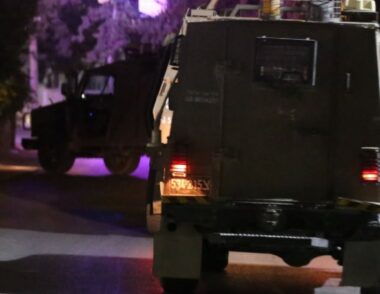 Israeli soldiers abducted, on Tuesday evening, a young Palestinian man near the Halamish illegal Israeli colony, built on stolen Palestinian lands near the central West Bank city of Ramallah, after he allegedly rammed soldiers with his car, wounding one.

Media sources in Ramallah said the Palestinian has been identified as Mohammad Yassin, 30, from Bil’in village, west of Ramallah.

His father, Nathmi Yassin, said Mohammad suffers from health and psychological issues and is taking medications that appear to impede his ability to drive, adding that he was involved in traffic accidents before.

He added that the incident was not a deliberate attack and that his son should not have been driving but had to bring his wife and children from his in-laws’ house.

Following the attack, the soldiers closed the iron gate installed on the roads leading to villages in Ramallah and the Salfit road, in addition to installing a roadblock near Birzeit city, causing extended traffic jams.

The Israeli army said the incident led to a moderate injury to one soldier, 19 years of age, who was airlifted by helicopter to an Israeli hospital.

The army is also claiming the incident was a deliberate attack targeting the soldiers and added that the driver was arrested and taken to an interrogation facility.

On Tuesday at night, Israeli soldiers shot a Palestinian teenage boy near the Halhoul Bridge area, north of Hebron, in the southern part of the occupied West Bank.