Israeli Soldiers Abduct A Student, Injure Many Others, In Kadoorie University In Hebron 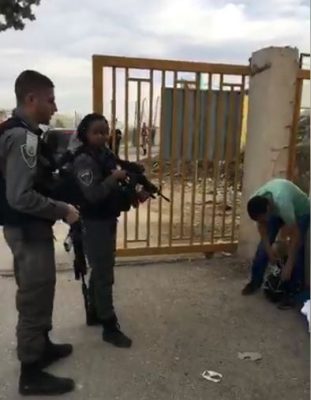 Israeli soldiers abducted, Tuesday, one student and caused dozens to suffer the effects of teargas inhalation, after the army fired many gas bombs and rubber-coated steel bullets at students, protesting in the Palestine Technical University – Kadoorie, al-‘Arroub branch, north of the southern West Bank city of Hebron.

The soldiers invaded the college campus and assaulted many students, before firing gas bombs and rubber-coated bullets at them.

Medical sources said all wounded students suffered the effects of teargas inhalation, and received treatment, without the need for hospitalization. Issa al-‘Emla, the head of the Students’ Affairs Department, said the soldiers also abducted a student, identified as Ibrahim al-Halabi, from Doura town, south of Hebron.

The student was taken prisoner from the college campus, before the soldiers moved him to an unknown destination.

Al-‘Emla called on the international community, and all related legal and human rights organizations, to intervene and help in ending the serious Israeli military escalation, against the Palestinian people and their educational facilities.

It is worth mentioning that Israeli soldiers also injured at least 40 Palestinians, after attacking students protesting in Kadoorie campus, west of Tulkarem, in the northern part of the occupied West Bank.

Also in the occupied West Bank, on Tuesday, a Palestinian youth was hit with an Israeli army bullet during clashes in Nablus, said the Ministry of Health, according to WAFA.

It said that the teen, who remains unknown until the moment, was transferred to a hospital in Israel for surgery.