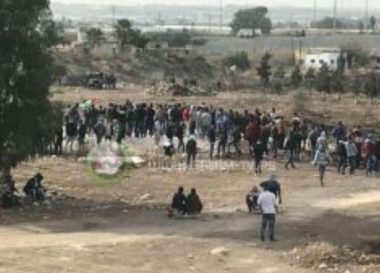 The Palestinian Red Crescent said the soldiers shot ten students with rubber-coated steel bullets, some of them in the head, and caused at least thirty others to suffer the severe effects of teargas inhalation.

It is worth mentioning that the army has a military base, which was built on lands illegally confiscated from the college.

The soldiers fired dozens of gas bombs, concussion grenades, and rubber-coated steel bullets at the students, while many hurled stones at them after attacking their procession.

The soldiers also attacked many reporters, and inspected their ID cards, before forcing them out of the area.

In related news, several army jeeps invaded, on Tuesday evening, Sebastia town, north of Nablus, and smashed the windows of tourist stores near an archaeological site, and threatened to shut them down permanently “should clashes continue in the area.”