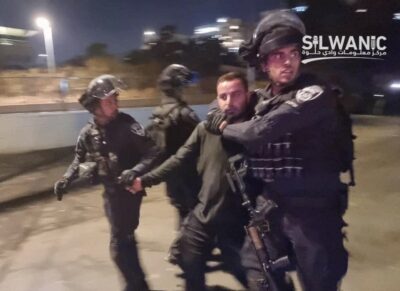 On Friday dawn, Israeli soldiers abducted at least 24 young Palestinian men from their homes in several neighborhoods and towns in occupied Jerusalem, in the West Bank.

Firas Al-Jibrini, the lawyer of Wadi Hilweh Information Center In Silwan (Silwanic), said the soldiers broke into and searched dozens of Palestinian homes overnight in various neighborhoods of Jerusalem.

He added that the invasions mainly targeted Shu’fat, Beit Hanina, Sheikh Jarrah, Silwan, and the Old City before the soldiers ransacked dozens of homes and abducted at least 24 Palestinians.

Two of the abducted Palestinians are a child, Amin Mohammad Al-Abbassi, 16, and a young man, Mohammad Jaber Al-Abbassi, 22, who were taken from their homes in the Ein al-Louza neighborhood in Silwan.