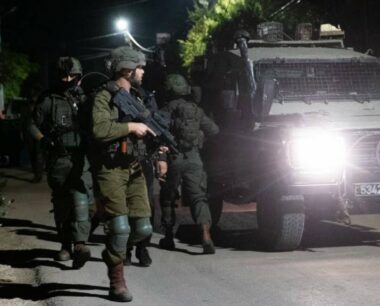 On Wednesday dawn, Israeli soldiers abducted at least eight Palestinians after the army invaded and ransacked many homes, and exchanged fire with Palestinian fighters in Nablus and Beita town, south of the city, in the northern part of the occupied West Bank.

In the Old City of Nablus, the soldiers stormed, ransacked many homes, and abducted Mohammad Hashash and Ahmad Abu Al-Hoda.

The soldiers also abducted Sheikh Taha Qatanani from his home in the Housing Projects area in the city but released him a few hours later.

Taha is the father of Ashraqat Qatanani, who was only sixteen years of age when she was killed after an Israeli colonizer rammed her with his car after claiming she had a knife. When the girl fell to the ground, another Israeli paramilitary colonizer pulled over and shot her multiple times.

It is worth mentioning that Palestinian resistance fighters exchanged fire with Israeli soldiers who invaded Nablus city, especially the Old City and Beita town.

On Tuesday night, illegal Israeli colonizers attacked many Palestinian homes and cars in the eastern areas of Orif, south of Nablus, causing damage.

The colonizers also installed a mobile home on a Palestinian land in Asira Al-Qibliya town, southwest of Nablus, and fenced it.