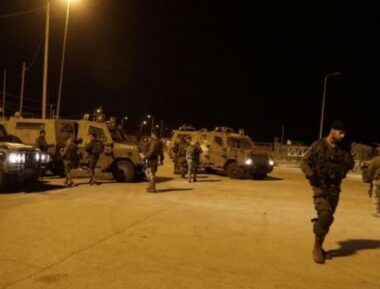 Israeli soldiers abducted, on Friday at dawn, eight Palestinians, including former political prisoners, and injured one, after the army invaded Nablus, Jenin, and Tubas, in the occupied West Bank.

They stated that many Palestinians protested the invasion and added that the soldiers shot a young man with a rubber-coated steel bullet in the mouth, in addition to causing many to suffer the effects of tear gas inhalation.

The soldiers also installed several roadblocks around villages and towns, south of Jenin city, before stopping and searching dozens of cars, and interrogated many Palestinians while inspecting their ID cards.

Kamal Bani Odah, the head of Tubas office of the Palestinian Prisoners’ Society (PPS) has reported that the soldiers abducted a former political prisoner, identified as Ahmad Fayez Abu al-‘Ayed, 21, from the city.