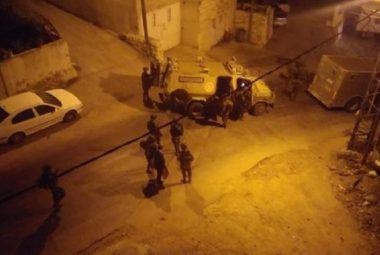 The Palestinian Prisoners’ Society (PPS) has reported that Israeli soldiers abducted, on Sunday at dawn, at least fifteen Palestinians, from their homes after violently searching them, in different parts of the occupied West Bank.

The Bethlehem office of the PPS said the soldiers invaded many homes, in different parts of the district, searched them, and abducted five Palestinians.

The abducted Palestinians have been identified as Hasan Ahmad Sabateen, 22, and Yazan Minwer Sabateen, from Husan town, to Moayyad Salah Taqatqa, 22, from Beit Fajjar, Jamil Ibrahim Taqatqa, 18, from Um Salmouna village, and a young woman from Taqatqa family, the sister of Raddad Taqatqa, who was abducted by the soldiers two days ago.

The soldiers also installed a sudden roadblock near Jenin, and abducted a young man, identified as Saeb ‘Alawna.

In Hebron district, in the southern part of the West Bank, the soldiers invaded and ransacked several homes, interrogated many Palestinians, and abducted seven, including a father and his four sons.

The soldiers abducted Mohammad Hisham Ja’bari, and Ma’moun Hussein Salah Natsha, 17, from their homes in Hebron city, during extensive and violent military searches of homes, the Hebron office of the PPS said.

in Sammoa’ town, south of the city, the army also violently searched homes, interrogated many Palestinians, and abducted Mohammad Khader Hawamda, along with his sons, Khalil, 33, Ali, 28, Yousef and Ahmad.