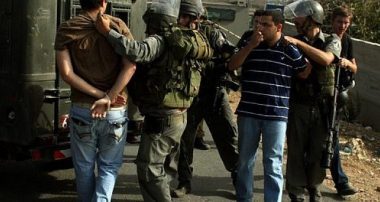 Israeli soldiers abducted, on Sunday evening, one Palestinian near the northern West Bank city of Jenin, three others north of Salfit, in central West Bank, and a young woman in occupied Jerusalem, in addition to briefly detaining fourteen others in Hebron, in southern West Bank.

Media sources in Jenin said the soldiers abducted a young man, who remained unidentified at the time of this report, after stopping him outside the Salem military court, west of Jenin.

In addition, the soldiers detained and interrogated fourteen Palestinians, east of the southern West Bank city of Hebron, after a group of illegal colonialist settlers invaded Palestinian lands and tried to install an outpost.

Eyewitnesses said the soldiers attacked the Palestinians, who were defending their lands, and briefly detained, and interrogated fourteen of them.

The soldiers did not detain or even question any of the illegal colonizers who invaded the Palestinian lands.

In occupied Jerusalem, the soldiers abducted a young woman at a security checkpoint leading to the District Court, allegedly after finding out “she carried a knife,” and moved her to an interrogation center.

Also Sunday, the soldiers at least seven Palestinians, from their homes, in several parts of the occupied West Bank, including Jerusalem.

Furthermore, the army killed two Palestinian children and wounded 2 others after the Israeli forces fired artillery shells at them near the border fence with Israel in al-Shokah village, east of Rafah City.