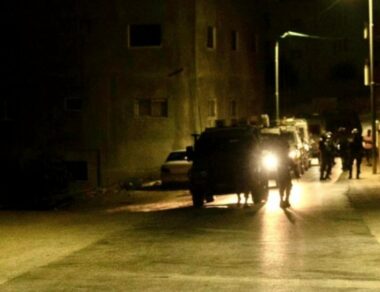 In Ramallah, in the central West Bank, the soldiers abducted Edrees Al-Abed from his home in Kobar town, Salahuddin Ibrahim Zobeidi from the Al-Jalazoun refugee camp, and Tha’er Yousef Hamadan from his home in Beit Sira village.

In Jenin, in the northern West Bank, the soldiers invaded Qabatia town, south of the city, searched and ransacked many homes, and interrogated several Palestinians before abducting a young man, Mohammad Saho.

Bassem Mustafa Al-Ahmad, a resident of Rommana, said many soldiers stormed his home before, forced his family into one room while ransacking the property, and confiscated surveillance equipment and recordings.

The invasions led to protests in the town before the soldiers fired many live rounds, rubber-coated steel bullets, and gas bombs.

The soldiers also detained Khaled Hussein Al-Aseel after invading his home in Rommana and interrogated him for several hours before releasing him.

In Hebron, in the southern part of the West Bank, the soldiers abducted a young man, Ismael Mahmoud Gheith, from his home in the center of the city, after storming the property and ransacking it.

The soldiers installed roadblocks on Hebron’s northern roads and the main entrance of Beit Kahil, Sa’ir, and Halhoul towns, stopped and searched dozens of cars, and interrogated many Palestinians while inspecting their ID cards.

Also Tuesday, the soldiers abducted eleven Palestinians, including one woman, from their homes in occupied Jerusalem in the West Bank.