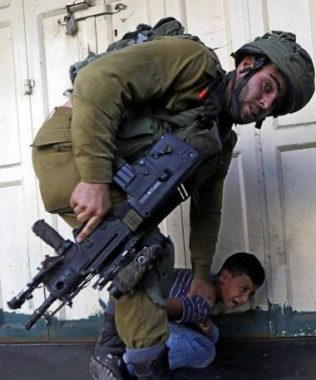 Israeli soldiers abducted, earlier on Wednesday, five Palestinians, including a child, in the West Bank governorates of Hebron, the Northern Plains, and in occupied East Jerusalem.

Media sources in Hebron, in the southern part of the West Bank, said the soldiers invaded many homes in the al-’Arroub refugee camp, north of the southern West Bank city of Hebron, and abducted a child, identified as Ammar Mohammad Jibreel, 13, in addition to Sa’id Hajajra, 29, and Ibrahim Jawabra.

The soldiers also installed roadblocks on the main entrances of several villages and towns in the governorate, before stopping and searching dozens of cars, and interrogated many Palestinians, while inspecting their ID cards.

His family said this abduction of their son, who works in agriculture, is the third, as he was detained and imprisoned twice before, and has two other brothers, who are also political prisoners in Israeli prisons.

In addition, the soldiers abducted Hamza Nimir, one of the guards of the Al-Aqsa Mosque, in Jerusalem, while heading to the holy site, through the Chain Gate.

The guard was previously detained and imprisoned twice, and was received several orders preventing him from entering the holy site. He was detained today although these orders have expired.

It is worth mentioning that the soldiers invaded, at dawn Wednesday, Harmala village, east of the West Bank city of Bethlehem, and abducted three Palestinians, including two siblings.