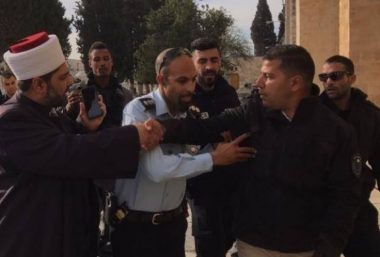 Israeli soldiers abducted, on Monday at dawn, four guards of the Al-Aqsa Mosque, in occupied East Jerusalem, and took them to several detention and interrogation centers.

The soldiers abducted Luay Abu Sa’ad, while trying to enter the mosque through Bab al-Asbat (Gate of The Tribes).

It is worth mentioning that Zeinat works as a guard in the women’s section of the Mosque.

Firas ad-Dibs, the Media Coordinator of the Islamic Waqf and Endowment Department, said the abducted four guards were among many Palestinians who intercepted Israeli fanatics, who invaded the Dome of the Rock mosque, Sunday, accompanied by many senior military officers, and conducted provocative acts.

It is worth mentioning that the army later released Ahmad Abu Ali, Qassem Kamal and Fadi Abu Meizer, and threatened severe punishments if they intercept the settler again. The fourth guard, Luay Abu Sa’ad, was remanded for further interrogation.