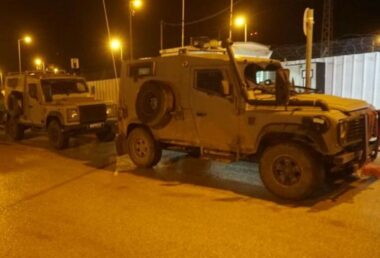 Israeli soldiers abducted, on Friday at dawn, four young Palestinian men, including a former political prisoner, in Hebron and Bethlehem, in the occupied West Bank.

They stated that the soldiers caused damage to the invaded homes, before abducting Nour Khaled al-Hroub, 24, and Mo’taz Mohammad al-Hroub, 24.

In Bethlehem, south of the occupied capital Jerusalem in the West Bank, the soldiers invaded the al-Khader town, south of the city, and abducted a former political prisoner, identified as Mahmoud Mohammad Salah, 27, from his home after searching and ransacking it.