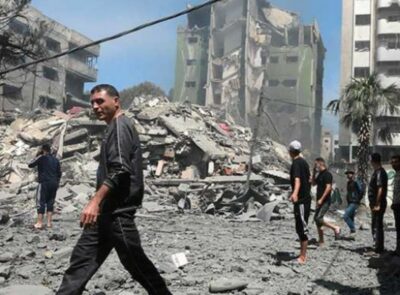 The Israeli government held a meeting to assess the security situation in the besieged and impoverished Gaza Strip and decided to ease some restrictions, including expanding the fishing zone.

The Maan News Agency quoted Israeli sources reporting that Israeli political and military officials have decided to increase the fishing zone allotted to the Palestinians in Gaza from 6 nautical miles to twelve, starting on Friday morning.

In addition, the “coordinator of [Israeli] government activities in the occupied territories, Ghassan Elyan, stated that starting this coming Sunday, Israel will allow the entry of goods and supplies that would enable the international community to conduct projects that would help the food sector, as well as the medical sector and fishing in the Gaza Strip.

He added that Israel has also agreed to allow the entry of some Israeli electric and agricultural tools and equipment, in addition to permitting the removal of metal waste from the coastal region.

Elyan also said that Palestinians who want to travel abroad will be allowed into the West Bank, before heading to the al-Karama border crossing with Jordan.

Israel will also allow the entry of 29 private cars that were purchased by the Palestinians but remained at the Erez (Beit Hanoun) Crossing, in northern Gaza, since the Israeli offensive on the coastal region in May of this year.

The Oslo Accords, signed by Israel and the Palestinian Liberation Organization in 1993 and 1995 stipulated that the Israeli occupation authorities must allow Palestinian fishermen to sail and fish up to 20 nautical miles off the coast, however, Israel constantly reduces the fishing zone to three miles, then six or nine.