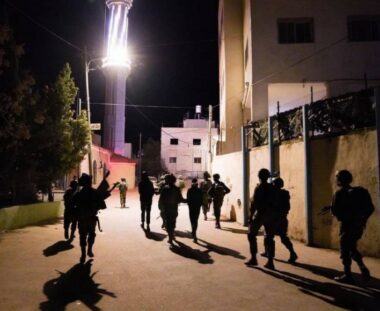 In Hebron, in the southern part of the West Bank, the soldiers abducted two siblings, Yayez and Firas Adnan An-Nather, from their homes in the city.

Also, the Israeli army claimed it located several weapons during invasions and searched of buildings in Hebron.

Local sources said the soldiers violently searched the homes of the two siblings, causing excessive damage, before abducting them.

In the occupied capital, Jerusalem, the soldiers invaded and searched a home in the Sa’diyya neighborhood in the Old City and abducted a young man, Nasser Hijazi.

In the Ar-Ram town, north of Jerusalem, the soldiers abducted a young man during searches of homes, leading to protests, and fired many live rounds, rubber-coated steel bullets, and gas bombs.

The invasions targeted Taybeh, Aneen, and Rommana, west of Jenin, in addition to At-Tarem, Nazlat Zeid, Toura, and Ya’bad, southwest of Jenin.