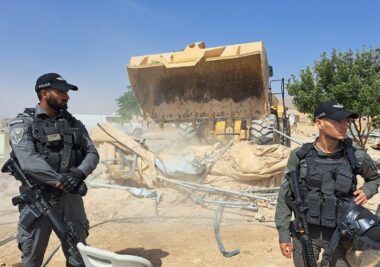 Rateb Jabour, a local Palestinian anti-occupation activist, told WAFA that an Israeli army force raided the village of Al-Jawaya in Masafe Yatta and handed five local residents notifications informing them of a military order to demolish their homes, which shelter their families, including children and women.

The occupation authorities also ordered the demolition of three wells belonging to a local Palestinian resident.

The latest demolition orders come amid fears that the new far-right Israeli government of Benjamin Netanyahu, which includes racist figures known for their animosity toward the Palestinians, such as Itamar Ben-Gvir, could push for more and more demolitions of Palestinian homes in the occupied West Bank, especially in Masafer Yatta.

On May 4, the Israeli High Court gave the Israeli army the green light to demolish and displace over 1000 Palestinians living in some eight communities in Masafer Yatta in order to turn the area into a training and a firing zone.

The decision promoted strong local and international condemnation and warning of serious consequences if carried out.