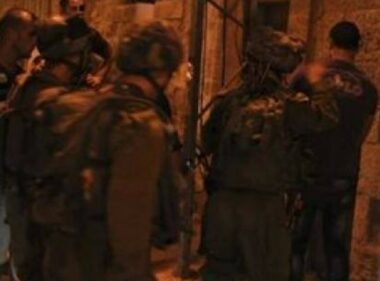 Israeli soldiers abducted, on Thursday at dawn, four Palestinians, including one woman, from occupied Jerusalem and Bethlehem, in the occupied West Bank.

Media sources in the occupied capital, Jerusalem, said the soldiers invaded the al-‘Isawiya town, and abducted Mousa Haitham Mustafa, after invading his home and ransacking it.

They added that the soldiers also invaded Abu Dis town, east of Jerusalem, and abducted Abdul-Salam Ayyad, a member of the town council, from his home.

In addition, the soldiers assaulted and injured a young woman, who remained unidentified at the time of this report, after stopping her near the Al-Aqsa Mosque, and abducted her.

Furthermore, the soldiers invaded the al-Khader town, south of Bethlehem, and abducted Majed Ayman Mousa, 20, after storming his family’s home and ransacking it, and took him to the nearby Etzion military base.