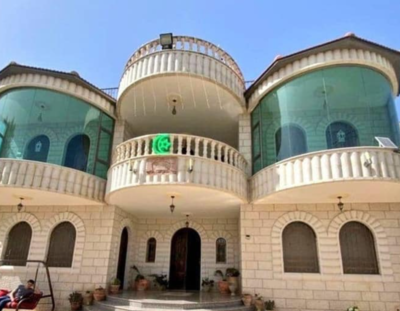 Israeli soldiers detonated, on Thursday at dawn, the home of a Palestinian detainee who also holds American citizenship, in Turmus Ayya town, north of Ramallah, in central West Bank.

Local sources said dozens of soldiers and armored military vehicles invaded the town after isolating it and surrounded the home before forcing the family out, in addition to forcing the Palestinians who live nearby to leave their homes.

They added that the soldiers then wired the home and detonated it, leading to protests.

The home belongs to a wealthy Palestinian businessman who also holds American citizenship, identified as Montaser Shalabi; Israel claims that the detainee killed an Israeli settler near Za’tara military roadblock, south of the northern West Bank city of Nablus, nearly two months ago.

His wife said the destruction of the property is a serious violation of basic rights and added that the family will rebuild the property.

“We are not the first to have this done to us; this is all part of Israel’s illegal policies of collective punishment, and ongoing violations,” she added, “We will rebuild, and we will remain steadfast.”

The Israeli Intelligence Service Shin Bet has claimed that Muntaser Shalabi, 44, fired a gun ten times from a vehicle, a silver SUV, then fled the scene. They claim to have located him hiding in a building in the town of Silwad, near Ramallah, and that he was suffering from a gunshot wound in the leg when he was found. Israeli TV Channel 13 said Israel previously delayed the demolition of the home to avoid tension with the US Administration because Shalabi is an American citizen and a known businessman.

It is worth mentioning that Shalabi, 44, was abducted by the soldiers in Silwad town, east of Ramallah, on May 6th, before the army issued the demolition order.

The family filed an appeal with an Israeli court, but it was denied on June 23rd. The Palestinian Prisoners’ Society (PPS) denounced the demolition and said it is part of Israel’s ongoing illegal collective punishment policies that violate International Law and various treaties and is considered a war crime against the civilian population.

It is worth mentioning that Israel demolished 31 Palestinian homes and structures, last month, in several parts of the occupied West Bank, including Jerusalem, under various allegations, including “being built without permits.”