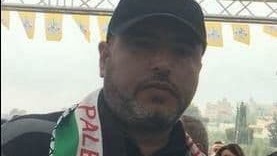 Israeli forces have abducted a 44-year old Palestinian businessman and claimed he was the ‘lone gunman’ behind a drive-by shooting at Israeli settlers on Sunday night that left one dead and two injured.

The Israeli Intelligence Service Shin Bet has claimed that Muntaser Shalabi, 44, fired a gun ten times from a vehicle, a silver SUV, then fled the scene. They claim to have located him hiding in a building in the town of Silwad, near Ramallah, and that he was suffering from a gunshot wound in the leg when he was found.

The wound, they claim, was sustained during the shooting, when Israeli soldiers returned fire toward the silver vehicle and allegedly hit the shooter, who was also the driver of the vehicle.

Israeli authorities admit that Shalabi, a wealthy businessman with no ties to any resistance groups, does “not fit the profile” of someone who would carry out an attack against Israelis, they told reporters that they are confident in their claim that he is the ‘lone gunman’ behind the attack.

Shalabi’s son Ahmad and his wife Sanaa were recently interrogated by the Shin Bet Israeli Intelligence Services – the Shin Bet is infamous for its use of so-called ‘enhanced interrogation’ or torture when questioning Palestinians. Although the practice of torture during interrogation is widely discredited as useless in gaining information and is forbidden by international law and the Fourth Geneva Convention, Israeli authorities regularly engage in the torture of Palestinian suspects.

The vehicle involved in the shooting was found abandoned in the town of Aqraba, where local Palestinians set it on fire before Israeli authorities could seize it.

Israeli Prime Minister Binyamin Netanyahu, who is currently on trial for corruption and has been unable to form a government, stated Wednesday, “I commend the Shin Bet, the [Israeli military] and the police for their swift and determined action that led to the capture of the despicable terrorist who murdered Yehuda Guetta and wounded Benaya Peretz. Israel’s long arm reaches anyone who harms our citizens.”

The night of Shalabi’s capture, Wednesday, Israeli forces killed a Palestinian teenager who was taking part in protests of the Israeli closure that has been in place for most of the northern West Bank for the past three days. The child, Sa’id Yousef Mohammad Odah, 16, was killed in his hometown, the northern West Bank village of Odla, south of Nablus.