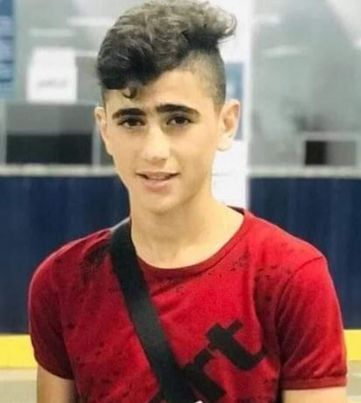 Israeli soldiers shot and killed a Palestinian child on Wednesday, south of Nablus in the northern occupied West Bank, during an invasion of the Palestinian village of Odla. The child was identified as 16-year old Sa’id Yousef Mohammad Odah. He was protesting the Israeli closure of his village for the past three days, and of many villages and towns in the northern West Bank.

Sa’id was known in his town as a very skilled soccer player. He played for the Balata Youth Football League, and competed in different parts of the West Bank (when the Israeli occupation would allow). Soccer matches for Palestinian athletes living under Israeli martial law are frequently stopped by the Israeli military, or teams are prevented from traveling for matches.

Since a drive-by shooting on Sunday in which three Israeli colonial settlers were wounded (one later died of his wounds), Israeli forces conducted a massive manhunt which shut down the daily lives and activities of hundreds of thousands of Palestinians who live in the area. Many were prevented from leaving home, prevented from going to work or school, and forced to wait in lines at ‘flying checkpoints’ for many hours at a time.

According to the Palestinian Red Crescent Society (PRCS), Sa’id was shot with a live round by Israeli forces, while another young man was shot with a rubber-coated steel round and taken to Rafidia hospital in Nablus.

The Israeli forces who shot Sa’id then prevented Palestinian medics from reaching the scene. The soldiers dragged his body into a military vehicle and took him to an unknown destination – likely a military base. He was not given medical treatment, and his body was only returned to the Palestinian Red Crescent Society after his death.

It is unknown if he would have survived his injuries if he had been allowed to receive proper medical care at the scene.

Israeli forces frequently detain the Palestinians they have injured and killed, and prevent them from receiving medical care. This denial of medical care is

Sa’id was from the northern West Bank village of Odla, which is where he was killed.