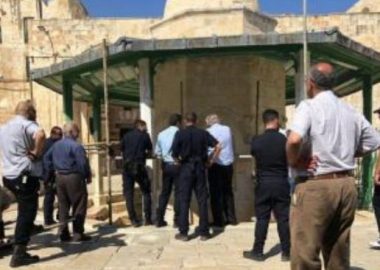 Israeli soldiers abducted, Saturday, four Palestinians who work for the Al-Aqsa Reconstruction Committee of the Islamic Waqf and Endowment Department in occupied Jerusalem.

The four were taken prisoner while performing their duties in the holy site, and were moved to al-Qashla detention and interrogation center in the Old City.

They have been identified as Issa Dabbagh, Bassem Zghayyar, Jom’a Manasra and Hamad Alqam.

In related news, the soldiers abducted, on Saturday at dawn, a young man, identified as Khaled Ahmad Eghbariyya, from Tayba village, west of the northern West Bank city of Jenin, after invading his home and searching it.