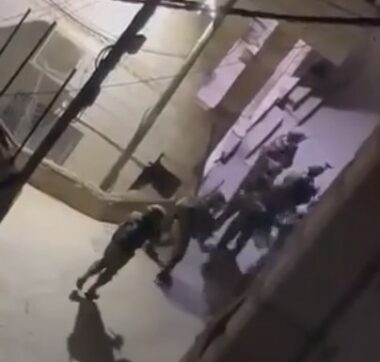 In Qalqilia, in the northern West Bank, the soldiers abducted Obaida Walid az-Zayyat, 31, from Azzoun town, east of the city, after stopping him at a military roadblock near the northern entrance of his town.

In Bethlehem, the soldiers invaded the ‘Aida refugee camp north of the city, searched homes, and abducted two siblings, Amir Ismael Elian, 19, and his brother Ibrahim, 17, in addition to Mos’ab Aqel Mashayikh, 19.

It is worth mentioning that Amir is still recovering from gunshot wounds he suffered after an Israeli soldier shot him in the thigh a week earlier.

In Ramallah, in the central West Bank, the soldiers invaded the Nubani Farms village north of the city, searched homes, and abducted Emad Al-Masri and Bassem Kanaan Dagher.

In Salfit, also in the central West Bank, the soldiers abducted two young men, Nour Al-As’ad and Hamza Bouziyya, from their homes in Kifl Hares town, north of the city.

In Hebron, in the southern part of the West Bank, the soldiers abducted Monjid Mohammad Yamani after storming his home and ransacking it.

The soldiers also installed roadblocks on Hebron’s northern entrance and the main streets leading to Yatta, Sa’ir, and Halhoul, stopped and searched many cars, and interrogated the Palestinians while inspecting their ID cards.

Bouziyya, a former political prisoner who Israel held for ten years, was attacked and injured by the soldiers before they abducted him.