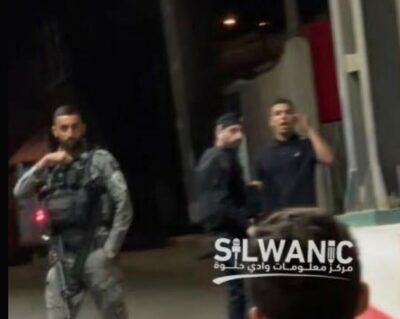 On Thursday, Israeli soldiers abducted at least fourteen Palestinians from several parts of the occupied West Bank, including the occupied capital, Jerusalem.

Media sources in Hebron, in the southern part of the West Bank, said the soldiers invaded and ransacked many homes in the governorate and abducted three Palestinians.

They said the soldiers abducted Anas Taiseer al-Awawda, 26, and Mo’tasem Ghazi Shawamra, 22, from their homes in Doura town, south of Hebron, and Bassem Mohammad al-Masalma, from his home in Beit Awwa town, west of the city.

The Wadi Hilweh Information Center In Silwan (Silwanic) said the soldiers also abducted a young man, Hussein Issa, 18, from Silwan town, south of the Al-Aqsa Mosque in occupied Jerusalem, while crossing a military roadblock northwest of Jerusalem, and a young man, who remained unidentified at the time of this report, after stopping him near Bab Hutta in Jerusalem’s Old City.

Silwanic added that the soldiers also abducted Mahmoud Jamal Atiya and Adam Kayed Mahmoud from the al-‘Isawiya town in Jerusalem.

In Deheishe refugee camp, south of Bethlehem, the soldiers abducted Khaled Emad Faraj, 24, from his home after storming the property and ransacking it, causing damage.

In Qalqilia, in the northern West Bank, the soldiers invaded and ransacked the homes of Sayyaf Qassem Silmi, 20, and abducted him.

Also, Israeli soldiers abducted five Palestinians in several parts of Jenin, in the northern part of the occupied West Bank.