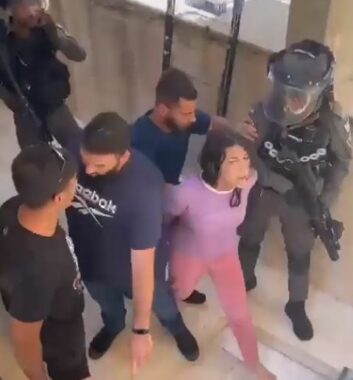 On the first day of the al-Fitr Muslim feast, Israeli soldiers carried out extensive and violent searches of homes in occupied Jerusalem, and abducted many Palestinians, including two teenage girls who were forced out of their home.

Mohammad Abu al-Hummus, a member of the Follow-Up Committee in al-‘Isawiya town, in Jerusalem, said the soldiers and police officers stormed and ransacked many homes, before abducting the Palestinians.

He added that the soldiers assaulted many Palestinians in their homes, and dragged them out while threatening to shoot them.

The Wadi Hilweh Information Center In Silwan (Silwanic) has reported that the soldiers abducted two teenage girls identified as Tala and her sister Hadeel Darwish, after forcing them out of their home. (Video – Silwanic)

The soldiers also abducted many Palestinians (Video – Silwanic) from several parts of Jerusalem; some of them have been identified as Baha’ Najeeb, Mustafa Abdul-Latif, Ahmad Natsha and Mohammad Ghassan.