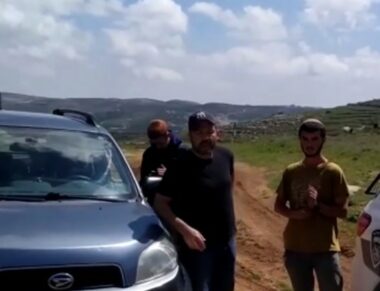 Fuad al-Amour, the coordinator of the Protection and Steadfastness committees in Masafer Yatta and Hebron Hills, said the Israeli assailants came from the illegal Havat Ma’on colony, which was installed on Palestinian lands.

He added that the colonists assaulted Palestinian shepherds, and two international solidarity activists, with clubs and rocks.

Two international solidarity activists were injured; one suffered a moderate wound to the head before he was moved to the Soroka Israeli medical center.

The colonists also caused damage to Palestinian cars, and property, in addition to firing several rounds of live ammunition.

Al-‘Amour stated that several international activists volunteered to accompany Palestinian shepherds who have been subject to constant assaults and violations by the colonists who also frequently try to prevent them from entering Palestinian grazing areas.