Israeli Soldiers Abduct Many Palestinians, Injure One, In The West Bank 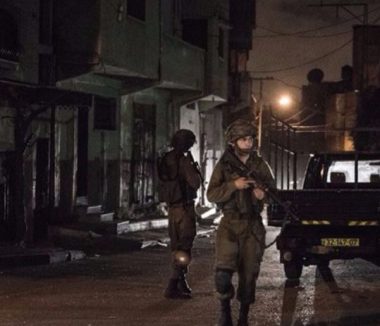 Israeli soldiers abducted, on Sunday at dawn, many Palestinians, during violent invasions and searches of homes, and shot one, in several parts of the occupied West Bank.

Medical sources said the soldiers shot a young man in Abu Shkheidim, before he was rushed to a local hospital.

In Hebron, in the southern part of the West Bank, the soldiers invaded and searched many homes, owned by members of al-Qawasmi family, in addition to a home owned by Soheil al-Ajlouni, a local lawyer, and illegally confiscated thousands of shekels.

The Israeli army said its soldiers confiscated case from homes, and “arrested five Palestinians in Hebron”; their names remained unknown at the time of this report.

Nine of the abducted Palestinians have been identified as: