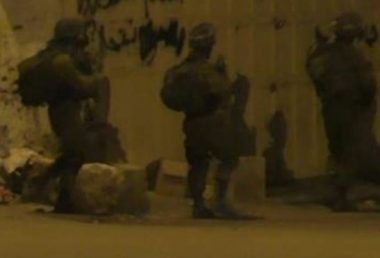 Israeli soldiers abducted, on Tuesday at dawn, nine Palestinians from their homes, in different parts of the occupied West Bank, the Palestinian Prisoners’ Society (PPS) has reported.

The Hebron office of the PPS, in the southern part of the West Bank, said the soldiers invaded Doura and Beit Ummar towns, searched many homes and abducted three Palestinians, identified as Hamza Ali Awad, 21, and Amin Emad Sleibi, 15, from Beit Ummar, in addition to Yousef ‘Ayed al-Faqeeh, 21, from Doura.

It added that the soldiers detonated the main doors of the homes of the abducted Palestinians, before searching and ransacking them.

The soldiers also invaded and searched a gas station in ‘Aseeda area, in the center of Beit Ummar.

Furthermore, the soldiers installed many roadblocks on main roads in the Hebron governorate, before stopping and searching dozens of cars, and interrogated many Palestinians while inspecting their ID cards.

In Bethlehem, the soldiers invaded and searched homes, and abducted Saleh Amin al-Hreimi, 18, from Khalayel al-Louz area, in addition to Morad Mousa al-Khmour, 19, and Nabil Akram Fararja, 27, from Deheishe refugee camp, south of the city.

The soldiers also invaded the home of Adel Daoud Sha’er, to abduct his son, but could not locate him, and searched the property along with several nearby homes.

In related news, the soldiers invaded al-Yamoun town, west of the northern West Bank city of Jenin, and abducted ‘Ala Ahmad Houshiyya, 30, in addition to a former political prisoner, identified as ‘Assem Jamal Abu al-Haija, from Jenin refugee camp.

Clashes took place around Jenin governmental hospital, after the soldiers invaded homes in the area, and interrogated many Palestinians.