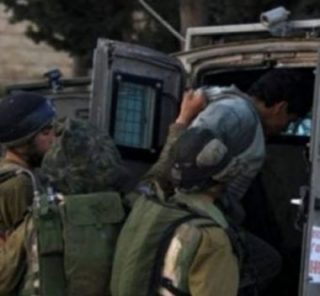 Israeli soldiers abducted, earlier on Sunday morning, seven Palestinians, from their homes, in different parts of the occupied West Bank, confiscated money, and detained many schoolteachers.

The soldiers stormed and ransacked many homes in Jenin, in northern West Bank, before violently searching them, and illegally confiscated thousands of Shekels.

Furthermore, the Palestinian Prisoners’ Society (PPS) said the soldiers abducted  seven Palestinians in the West Bank, five of them  have been identified as:

The soldiers also summoned several Palestinians, including Wa’el Ka’bi and his son Nidal, for interrogation in Huwwara military base, south of Nablus, in northern West Bank.

In Jenin, in northern West Bank, the soldiers invaded al-‘Amarna and al-Ba’jawi neighborhoods, in the city, in addition to the villages and towns of Ya’bad, Rommana, Zabbouba, Ta’nak and Toura, and installed many roadblocks, before stopping and searching dozens of Palestinians and cars.

In Hebron, in the southern part of the West Bank, the soldiers invaded Masafer Yatta area, south of the city, and briefly detained many schoolteachers, after confiscating a car, owned by Suleiman Abu Sabha.

The soldiers closed the area, and prevented the Palestinians from entering or leaving it, after declaring it a “closed military zone.”