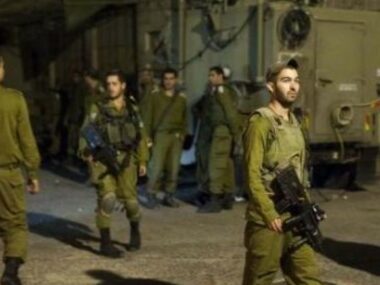 Media sources said several army vehicles surrounded the town before the soldiers invaded it, just before Iftar on the last day of Ramadan.

They added that undercover soldiers also infiltrated the town before storming and ransacking the homes of Samih ‘Aasi and Mohammad Mer’ey.

Ibrahim ‘Aasi, the mayor of Qarawat Bani Hasan, said the soldiers abducted Samih ‘Aasi, and his sons, former political prisoner Yousef, after assaulting him, in addition to Amir, 16, and Bilal, 15.

The mayor added that the soldiers also invaded and ransacked the home of Mohammad Mer’ey before abducting him along with his sons Yahia, 20, and Montaser.

The invasions led to protests in several parts of the town before the soldiers fired gas bombs, concussion grenades, and rubber-coated steel bullets at the Palestinians and their homes.