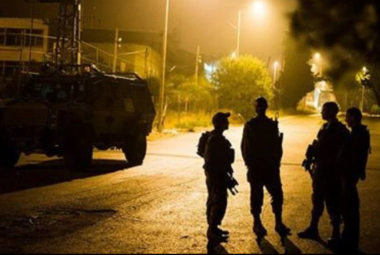 Israeli soldiers abducted, on Wednesday at dawn, seven Palestinians from their homes, in several parts of the occupied West Bank, and installed numerous roadblocks, especially in Ramallah governorate, the Palestinian Prisoners Society (PPS) has reported.

The PPS office in Ramallah said the soldiers invaded and ransacked many homes in at-Tira neighborhood, and Betunia town, west of the city, before abducting two Palestinians, identified as Haitham Saqer Zayed, 19, and his brother, Mohammad, 16.

The soldiers also ransacked the home of Fakher Zeid Abu Sha’ar, 51, in Betunia, causing excessive damage, in addition to invading and ransacking his carpentry workshop, and confiscated his car.

In addition, the soldiers installed many roadblocks on roads leading to various villages and towns, west of Ramallah, before stopping and searching dozens of cars, and interrogated the residents while inspecting their ID cards.

The roadblocks were mainly installed on Wadi ad-Dalb road, in addition to the villages and towns of Deir Ibzi’, Kafr Ni’ma and Nabi Saleh, causing huge traffic jams obstructing the movements of thousands of Palestinians, including those coming from north and west of Ramallah, in addition to Salfit and Qalqilia governorates.

In Hebron, in southern West Bank, the soldiers abducted a teenage boy, identified as Baha’ Jawabra, in addition to Lu’ay Jawabra, after invading and ransacking their families’ homes in the al-‘Arroub refugee camp, north of the city.

The army also invaded Beit Kahil town, north of Hebron, before storming the area around the home of a detainee, identified as Mahmoud al-‘Atawna.

The soldiers also installed roadblocks on roads leading to various villages and towns in Hebron, before stopping and searching dozens of cars, and interrogated many Palestinians while inspecting their ID cards.

In Jenin, in northern West Bank, the soldiers abducted Mojahed Ahmad Abu al-‘Ezz, on a roadblock leading to the Zababda town, south of the city.

It is worth mentioning that the Israeli police abducted Mustafa Saba’na, from Qabatia town, south of Jenin, while he was working in occupied Jerusalem.

In addition, the soldiers closed the “Container” military roadblock, east of Bethlehem, before stopping and searching dozens of cars, causing an extended traffic jam, and interrogated the residents while inspecting their ID cards.

It is worth mentioning that the Container roadblock is on the only road that links between the southern and northern parts of the occupied West Bank.