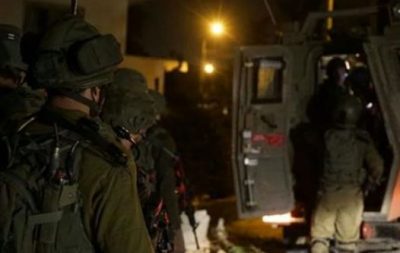 The Palestinian Prisoners’ Society (PPS) has reported that Israeli soldiers abducted, on Thursday at dawn, twenty Palestinians, including one woman, in several parts of the occupied West Bank and summoned a young woman for interrogation.

The PPS said the soldiers invaded and searched dozens of homes across the West Bank, and interrogated dozens of Palestinians while inspecting their ID cards.

The soldiers also invaded the home in a journalist, identified as Mos’ab Qfeisha, in Hebron city, in the southern part of the West Bank, and searched his property.

In addition, the soldiers invaded the al-Am’ari refugee camp, in the central West Bank city of Ramallah, and summoned a young woman, identified as Rafeef Ghazi, 25, for interrogation, after breaking into her home and violently searching it.

On Wednesday at night, the army said several Palestinians hurled stones at a colony’s bus, near Hizma town, northeast of occupied East Jerusalem, causing damage to its windshield.