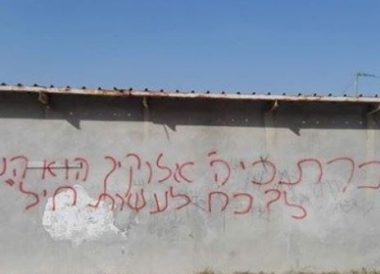 A group of extremist Israeli colonizers invaded, on Thursday at dawn, the village of Orif, south of the northern West Bank city of Nablus, wrote racist graffiti, and punctured the tires of many parked cars.

Daghlas added that the assailants invaded the northern area of the town, before writing racist graffiti and puncturing the tires of many cars.

The attacks targeted several homes and cars, including the homes of Ghaleb Radwan Amer, 59, and his son Mahmoud, 25