Israeli Colonizers Start The Construction Of New Outpost Near Salfit 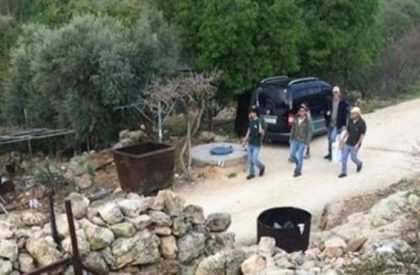 The Mayor of Salfit, Sa’id Zidan, said the so-called Civil Administration Office, run by the army in the West Bank, decided to build 108 colonialist units on 59 Dunams of Palestinian lands in three basins, to build the new colony.

He added that Israel “legalized” the construction of many homes for colonialist settlers in what was previously declared as a protected “Natural Reserve,” where the Palestinians have been denied the right to even plant trees, installed hot houses or irrigation pipes.

“We contacted various official sides, including the National Committee against the Wall and Colonies, the Department of Local Government, and the Agriculture Ministry, to file all needed applications to counter this illegal Israeli measure,” he said, “We only have two months to get all documents and appeals filed with Israeli courts.” Nathmi Salman, a local farmer and a member of the Deir Istiya Town Council said Israel uses the excuse of “Natural Reserve,” in order to “legalize” its takeover of Palestinian lands, and to prevent the locals from planting and taking care of their lands.

“This is happening while illegal Israeli colonists continue the building and expanding of their outposts on these lands,” Nathmi added, “This means the complete and illegal annexation of hundreds of Dunams of Palestinian lands.”

It is worth mentioning that Israel started targeting Qana Valley area since the early days of its illegal occupation of the West Bank in 1967, but the colonialist activities escalated in the late 1970’s, after Israel declared the area a “closed military zone,” and in 1983, it changed the classification of the Palestinian lands to “Natural Reserve.”