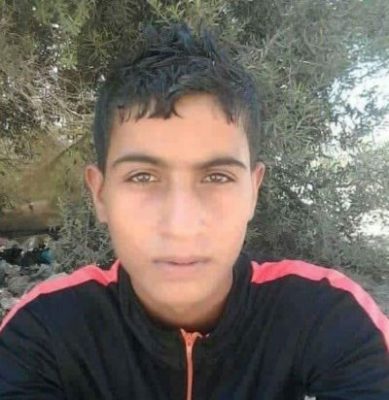 The Palestinian Health Ministry has confirmed that a child died, on Thursday afternoon, from serious wounds he suffered at dawn, after Israeli soldiers fired several shells at Palestinians, east of Rafah, in the southern part of the Gaza Strip.

He was rushed to Abu Yousef Najjar Hospital, in Rafah, where he underwent an urgent surgery, but later succumbed to his wounds at the Intensive Care Unit.

Another Palestinian was also injured in the Israeli attack and suffered moderate-to-severe wounds to various parts of his body.

The Israeli army claimed that the two Palestinians “were crawling towards the border fence,” when the soldiers fired a shell at them.

On Wednesday evening, the soldiers shot four Palestinians, one seriously, and abducted one child, east of Rafah, after the army claimed they attempted to breech the border fence. On June 24, a young man, identified as Osama Khalil Abu Khater, 29, died from serious wounds he suffered, two days earlier, when Israeli soldiers shot him with live fire during a protest at the Gaza border fence.

The latest deaths bring the number of Palestinians, killed by Israeli army fire and shells since the “Great Return March” processions started on March 30th, to 133, including two journalists, Yasser Mortaja, 31, and Ahmad Abu Hussein, 25.