Israeli Soldiers Abduct A Wounded Child, Injure Four Others, One Seriously, In Gaza 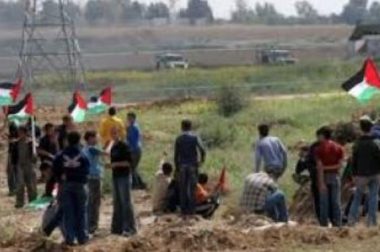 Israeli soldiers shot, on Wednesday evening, five Palestinians, including one child near Rafah and Jabalia, in the southern and northern parts of the Gaza Strip, and abducted the wounded child. One of the injured Palestinians suffered serious wounds.

Medical sources said the soldiers fired live rounds at protesters on Palestinian lands near the ‘border fence’, east of Rafah, in the southern part of the Gaza Strip, wounding four of them.

They stated that the wounded Palestinians were rushed to Abu Yousef Najjar Hospital and added that one of them suffered life-threatening wounds.

Furthermore, the soldiers abducted a child, 15 years of age, after shooting him on Palestinian near close to the fence, east of Jabalia, in northern Gaza.