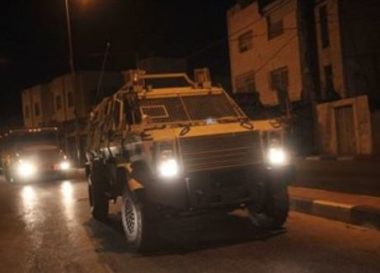 Israeli soldiers abducted, on Sunday at dawn, seventeen Palestinians, including a father and his daughter, from their homes in several parts of the occupied West Bank.

The Palestinian Prisoners’ Society (PPS) has reported that the soldiers stormed and ransacked dozens of homes across the West Bank, including occupied Jerusalem, causing damage, before abducting at least seventeen Palestinians.

It added that ten of the abducted residents are from the al-‘Isawiya town, in Jerusalem.

Another Palestinian, identified as Wahid Shabana, was abducted from his home in the at-Tour neighborhood, in Jerusalem.

Furthermore, the soldiers abducted a Palestinian father, identified as Yahia Ali Manasra, 46, and his daughter, Mariam, 20, from their home in Bani Neim town, east of the southern West Bank city of Hebron.

In addition, the soldiers abducted Hamza Monir, from his home in Sinjil town, northeast of Ramallah, in central West Bank.

In Ramallah city, the soldiers invaded the at-Tira neighborhood, west of the city, and fired a barrage of gas bombs at Palestinian protesters; dozens of residents suffered the effects of teargas inhalation.

The soldiers also fired gas bombs at Palestinian protesters, near the main entrance of Surda village, north of Ramallah.