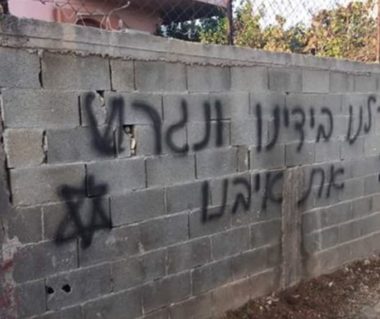 A group of fanatic illegal Israeli colonialist settlers infiltrated, on Sunday at dawn, into Marda Palestinian village, north of Salfit in central West Bank, and punctured the tires of many Palestinian cars in addition to writing racist graffiti.

Deputy-head of Marda Local Council, Dr. Monif al-Khoffash, said the colonists wrote racist graffiti on the walls of many Palestinian homes in the northern part of the village. He added that the assailants also punctured the tires of cars, owned by Shawqi Abu Bakr, Mohammad Ebdah, Zahi Mansour and Mohannad Mansour.

Al-Khoffash stated that the attack is one of the numerous assaults and violations by the illegal colonists.

He also said that the residents in the village live in an open-air prison in their own community, after Israel surrounded it with a fence, and installed gates on its two main entrances, several years ago.