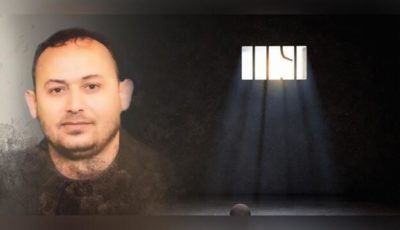 The hunger strike is meant to challenge the Israeli practice of “administrative detention”, which means holding Palestinian prisoners without charges for renewable six-month terms.

The hunger-striking prisoners are suffering from difficult health conditions that have reached the stage of danger to their lives, especially the one who has exceeded three months of strike.

The striking prisoners are: Ahmed Abdel Karim Ghannam (42 years), from Dura south of Hebron, who has been on hunger strike for 91 days in a row.

The prisoner Ismail Ahmed Ali (30 years) from the village of Abu Dis, east of occupied Jerusalem, has been on hunger strike for 81 days.

The leader of the Islamic Jihad movement Tariq Hussein Qadan (46 years) from the town of Araba south of Jenin, has been on hunger strike for 74 days.

Palestinian prisoners in Israeli detention are often subjected to harsh interrogation and conditions, and those under administrative detention are not given access to judges, courts or lawyers.

The protesting prisoners are challenging the conditions of their imprisonment, and the fact that they are being held without charges.