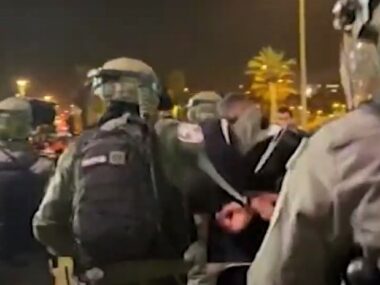 Israeli soldiers abducted six Palestinians on Wednesday evening and assaulted two of them after leaving the Al-Aqsa Mosque following evening prayers in occupied Jerusalem, in the West Bank.

The WAFA Palestinian News Agency said the soldiers assaulted two young men in the Bab al-Amoud area before abducting them.

WAFA added that the soldiers abducted three young men in the same area and pushed dozens of Palestinians away while threatening to shoot them.

The Israeli violations witnessed a serious escalation since the beginning of the Muslim holy month of Ramadan last Saturday, April 2nd, especially when the Palestinians are leaving the Al-Aqsa Mosque.

In the Old City, the soldiers abducted former political prisoner Rami al-Fakhouri and took him to a nearby detention center.

The Israeli army and the police have abducted thirty-eight Palestinians since the first day of Ramadan and released some of them after slapping them with orders barring them from entering Al-Aqsa and the Old City and imposing fines on many.