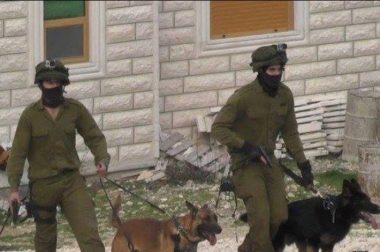 Israeli soldiers abducted, on Tuesday at dawn, six Palestinians, including a child, from their homes, in different parts of the occupied West Bank. The soldiers also invaded Palestinian lands, east of Jabalia, in northern Gaza.

The army also ordered two Palestinians, identified as Samer Hamdan and Arin Za’anin, who were abducted on Monday at dawn, under further interrogation until this coming Sunday.

In Hebron, in the southern part of the West Bank, the soldiers invaded homes in Beit Ummar town, north of the city, and abducted a child, identified as Majed Abdul-Aziz al-Hindi, 14.

The soldiers also invaded and searched the home of Shehda Younis Sabarna, and attempted to attack him and his family.

In addition, the army invaded Yatta town, south of Hebron, and installed roadblocks on Hebron’s northern and southern roads, in addition to main roads leading to Sa’ir and Halhoul towns, before stopping and searching dozens of cars, while inspecting the ID cards of the passengers.

In Tulkarem, in northern West Bank, the soldiers invaded homes in Far’un town, south of the city, and abducted Yazan Eyad Yousef, 20.

In related news, several armored military vehicles, including bulldozers, carried out a limited invasion into Palestinian lands, east of Jabalia, in the northern part of the Gaza Strip, while military drones hovered overhead.