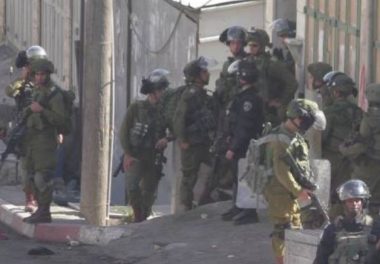 Israeli soldiers invaded, on Tuesday evening, the town of Yatta, south of the southern West Bank city of Hebron, and clashed with many Palestinians, causing scores of residents to suffer the effects of teargas inhalation.

Rateb Jabour, the coordinator of the Popular Committee against the Wall and Colonies in southern Hebron, said Israeli soldiers and colonist settlers invaded al-Carmel Park area, after surrounding it, and forced the Palestinians out, an issue that led to clashes.

The soldiers fired many concussion grenades and gas bombs, causing scores of residents to suffer the severe effects of teargas inhalation.

The soldiers also detained many Palestinians, who were driving their tractors on the agricultural road, and confiscated a tractor owned by Mahmoud Ali No’man.

In addition, the army installed a military roadblock in Zeev area, before stopping and searching dozens of cars, and interrogated many Palestinians while inspecting their ID cards.

It is worth mentioning that the colonists, who invaded the park under heavy military deployment, came from colonies, which were built on illegally confiscated Palestinian lands, east of Yatta.