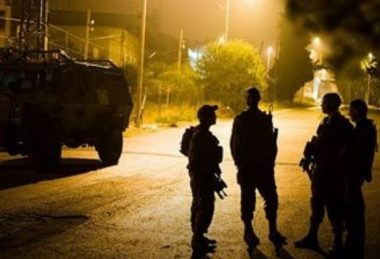 Israeli soldiers abducted, on Monday at dawn, ten Palestinians during massive and violent searches of homes, in many parts of occupied Jerusalem, and moved them to several detention and interrogation facilities.

Furthermore, the soldiers invaded homes in the Salam area, near Shu‚Äôfat refugee camp in Jerusalem, and abducted Adnan Aramin and Mohammad Zeidan.

In ‚ÄėAnata nearby town, the soldiers abducted Amin Fathi Hamdan, while Tareq Kayyala was taken prisoner from Shu‚Äôfat refugee camp.

Media sources in Jerusalem said the violent searched of homes led to excessive damage and caused anxiety attacks among many children.